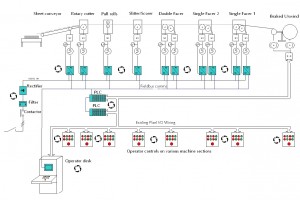 Corrugated materials are widely used for packaging purposes as well as in sectors such as agriculture and electronics. Corrugating machines are, therefore, important assets for a large number of packaging companies. Optima has helped some of them by improving corrugators’ performance and reliability. The diagram below depicts the control system designed by Optima for one corrugating machine. Below you will also find descriptions of two upgrade projects completed by Optima’s experts.

This remote I/O system places suitable I/O hardware close to the actual pushbuttons/lamps on the corrugator machine sections. Doing so removes the necessity for a large number of hard wires to be run between the main machine and the control cubicles, only a single fieldbus communications cable is required. This together with an emergency stop and power supplies were the only small signal wires that would be required. This resulted in lower installation equipment and effort being required and consequently lower cost.

There was an extra cost associated with the remote I/O hardware but this often balances advantageously when set against the installation cost savings.

For another project, our proposal was that the nip roll had to be controlled in a similar fashion to speed control. We suggested that a closed loop vector drive be employed following the main motor encoder signal which would give a high accuracy control loop.

In this case, the option to employ torque control would cause potential problems associated with the mechanical arrangement, namely:

We suggested that the resolution of the torque value required to run the arrangement in torque control would be very fine.

The gearbox between the input AC motor and the nip roll was a worm type box and has a ratio of 5:1. Furthermore, the gearbox was quite old.

Worm boxes are inefficient, new ones have typically 60% efficiency at max input speed and so have relatively high losses. This meant that a relatively large proportion of torque would be required to overcome these losses.

The gearbox ratio effectively multiplies the torque at the motor shaft reducing the resolution by the ratio value. In practical terms, the amount of torque required to tension the material might be small compared to that required to overcome losses. This let us to believe that employing torque control would be impractical due to the torque resolution.

By employing a closed loop vector drive and motor arrangement in encoder following mode, the system was a high accuracy one and could be adjusted to introduce more or less speed trim to control the draw on the material.

This method relied on the nip roll slipping (as they must do with a mechanical line shaft arrangement and over-speed).

Would you like to know more about other control system projects we have completed on corrugating machines? Please, leave us a short message here and we will send you additional information within 24 hours!

If you want to see how your machine or process is operating day in day out from anywhere in the world, where do you start? With the increased risk of hacking of industrial devices becoming ever more prevalent Security Week – New Vulnerabilities Can Allow Hackers to Remotely Crash Siemens PLCs it’s not as simple as just hooking your PLC onto your local network.

An increasing number of companies are turning to remote cloud-based solutions for machine monitoring. Optima are pleased to offer the Cloud-based solution which keeps your automation hardware safely behind a secure firewall. Most of our clients prefer a SIM-card based system. The benefits of this system are that the equipment is always live whenever there is cellular reception available. Our range of antenna options mean that reception is possible even in the most remote locations.

The video below shows a basic demonstration dashboard. If you would like to know more then please get in touch – we like to talk!

This video gives a very brief demonstration on how our Remote Access and Cloud Logging System can help you keep track of how your machine is performing. See when the machine is started, stopped, realise production metric data straight to your mobile, desktop or tablet.

We have been trialling our remote machine data dashboards #iot #industry4. These allow real-time data to be visualised from any PLC anywhere in the world to a PC, tablet or mobile ‘phone anywhere in the world! The system can communicate over 4G, Wi-Fi, or a direct Ethernet connection. From Kazakhstan (yes, we do have two units out there!) to Kendal (we haven’t got one there yet…), we have you covered for a very low monthly cost.
Our remote reporting dashboards which can send #production #reports by #email will shortly be ready for release.