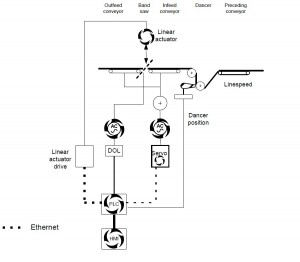 Cut-to-length or sheeting machines have a wide application in a number of industries including paper making, packaging, plastic films, metals and rubber. One cut-to-length system upgrade done by Optima featured replacing:

The band-saw was previously driven by a hydraulic motor, a fixed speed AC electric motor was supplied to replace this. The band-saw was tensioned using a hydraulic system, this was retained. The existing dancer was of a counter-balanced design with preset pneumatic dampers, it was retained. The infeed and outfeed conveyors were mechanically linked together and driven by a single motor. A servo motor was supplied to replace this. The length of the product was measured using a new encoder which was supplied for fitting in the place of the existing encoder on the infeed conveyor.

The operator was to control the cut-to length process using a HMI mounted on the operator panel.

Would you like to know more about other control system projects we have completed on cut-to-length machines? Please, leave us a short message here and we will send you additional information within 24 hours!

If you want to see how your machine or process is operating day in day out from anywhere in the world, where do you start? With the increased risk of hacking of industrial devices becoming ever more prevalent Security Week – New Vulnerabilities Can Allow Hackers to Remotely Crash Siemens PLCs it’s not as simple as just hooking your PLC onto your local network.

An increasing number of companies are turning to remote cloud-based solutions for machine monitoring. Optima are pleased to offer the Cloud-based solution which keeps your automation hardware safely behind a secure firewall. Most of our clients prefer a SIM-card based system. The benefits of this system are that the equipment is always live whenever there is cellular reception available. Our range of antenna options mean that reception is possible even in the most remote locations.

The video below shows a basic demonstration dashboard. If you would like to know more then please get in touch – we like to talk!

This video gives a very brief demonstration on how our Remote Access and Cloud Logging System can help you keep track of how your machine is performing. See when the machine is started, stopped, realise production metric data straight to your mobile, desktop or tablet.

We have been trialling our remote machine data dashboards #iot #industry4. These allow real-time data to be visualised from any PLC anywhere in the world to a PC, tablet or mobile ‘phone anywhere in the world! The system can communicate over 4G, Wi-Fi, or a direct Ethernet connection. From Kazakhstan (yes, we do have two units out there!) to Kendal (we haven’t got one there yet…), we have you covered for a very low monthly cost.
Our remote reporting dashboards which can send #production #reports by #email will shortly be ready for release.