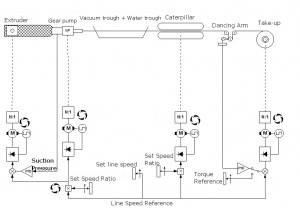 Extrusion is one of the most critical manufacturing processes in the plastics industry. Optima has been involved in several extruder control system retrofits including upgrades of PLCs and drives.

The diagram shows an overview of the functionality of an extrusion line. The speed references are generated digitally using setpoints from a SCADA system transmitted to the drives over DeviceNet.

Each part of the machine relevant to the control system has been given a location reference in the format “+1”.

The extruder follows a digital speed reference generated by a raise/lower ramp within a Parker drive controller.

In this upgrade project, a new operator panel was provided, complete with raise/lower push buttons, to set the required extruder speed. The existing screw speed meter was retained and was fitted into the new control panel.

The existing analogue tachogenerator was replaced with an encoder to provide more accurate speed control.

A 2 quadrant DC drive controller was used for this application. There was a facility, switch mounted in the Extruder control panel, to reverse the direction of the motor. This facility was provided by a field reversal contactor.

For another project, the new control system of the extruder consisted of a control panel containing the drive and an operator station with push buttons (Start, Stop, Raise, Lower, and E- Stop Reset). When the machine is started, the start button illuminates indicating that the machine is ready for operation. The Raise and Lower buttons are used to set the speed. When stopped with the Stop button, the machine ramps down to zero and stops. A digital display shows extruder speed set point. The system has an inch reverse facility.

The existing screw speed meter was retained and remained in the existing operator panel. In the past the machine used armature-voltage feedback control, but an encoder was installed for more accurate control. The existing mechanical pressure switch on the rear of the extruder was retained.

Would you like to know more about other control system projects we have completed on extruding machines? Please, leave us a short message here and we will send you additional information within 24 hours!